Today, March 20, is the UN International Day of Happiness. I don’t know about you but I have always thought of happiness as a relatively abstract concept, but as an individual one.  I acknowledge that its synonyms – contentment, satisfaction, jollity (seriously we don’t use this word enough!) or enjoyment – are easily understandable. As I did some reading, however, I began to wonder about the UN definition of gross global happiness. Ban Ki Moon, UN Secretary General stated that the world

“needs a new economic paradigm that recognises the parity between the three pillars of sustainable development, social, economic and environmental well-being are indivisible. Together they define gross global happiness”.

I’m all for measuring gross domestic product but gross global happiness…is this a step too far? As a translator, I’m happy when I’m translating because it makes me happy that I can gift someone with the possibility of reading a text in their own language. As Mandela so eloquently said,

As a translator, conveying and creating meaning gives me great satisfaction. I agree that social, economic and environmental well-being are essential to reducing poverty and improving living conditions. As a translator I contribute to this through the pro bono work I do for various NGOs via Translators without Borders (but that is a topic for another post). Can we really say though that people who have less of these measures of well-being have less happiness? Happiness for me is largely an individual thing, it’s about how our acts of kindness and attitude of service toward others make us feel connected to our lives. Human relationships are one of the most basic sources of happiness and to quote Aesop, lire sur cette page

“no act of kindness no matter how small is ever wasted”.

How do you translate happiness? 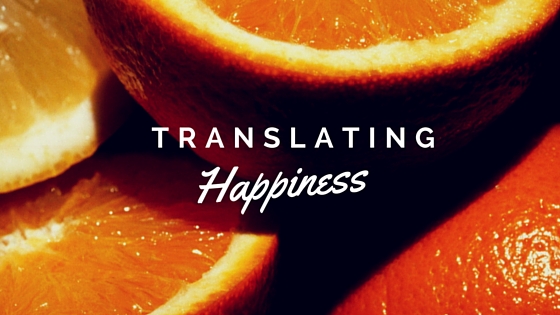